Walking to Birth is a short dance film in which a heavily pregnant woman searches for a place to bring her baby into the world.
The film is set in a forest with large trees.
She is directed by nature from one place to another.
By moving she is helping the child in her womb to find the way to earth.
She walks and dances with roots, trunks and branches of the trees.
They serve as a foothold, as resistance and support.
When her water breaks, it starts to rain.
The time has come.

Thanks to Sil van der Woerd and Peter Whiterose

– EXPOSITION ‘ Out of Balance’

–Dance for Camera programme from DANCE:FILM 11 at dance festival

– World Arts Film Festival at the Museum of Contemporary Art 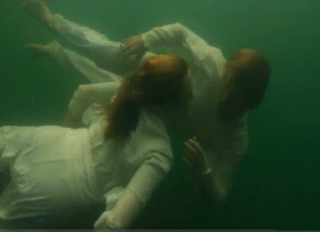 Satya Roosens produces performances which play mostly outside with the focus on movement in specific locations.

In 2010 Studio Eclipse was established to create performances like this.

In 2009/2010 she created the piece ‘Two sink, three float’, where the dancers become creatures that move in water in the middle of the nature. The only way to experience this performance is from the banks of the water, which means the audience misses the entire underwater dance.

This brought Satya to the idea to make a film in which the different underwater scenes are shown and bring a different perspective.

This is how the short film ‘Two sink, three float’ arose. It can be played at filmfestivals or can be shown after the performance.